Skip to Main Content
SDSN Mediterranean through the University of Siena and Visionaria will present at the Universal Exhibition in Milan the themes of food, the availability of water resources and sustainability. 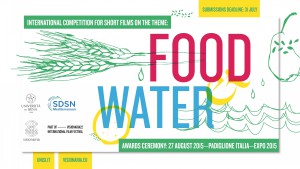 Thursday, August 27, the Italian Pavilion will host a relay of screenings and interventions that will end with the announcement of the winner of “Food & Water” the special section of the Visionaria International Film Festival organized by the University of Siena through the network Sustainable Development Solutions Network – SDSN Mediterranean
With “Food & Water: International Short Film Festival on Sustainability”, the University of Siena brings through cinema. to Expo 2015 the themes of food sustems, the availability of water resources and sustainability, Thursday, August 27 the Italian Pavilion in the Auditorium will host a relay of screenings of short films that will end with the announcement of the winner of the special section of the Visionaria International Film Festival named  “Food & Water”. A real competition in the contest, sponsored by the University of Siena and Visionaria through the network Sustainable Development Solutions Network – SDSN Mediterranean, to stimulate debate and call for the commitment of the international scientific community and high technology companies in finding practical solutions, supporting environmental and social and economic development, while providing the needs and rights of future generations. The short films  selected finalists are 10 among the nearly 200 participants from more than 20 countries worldwide. The selected titles are: “Can I stay?” Of The Onyee, Paige Carter, Katie Knudson (USA, 2015), “Central market” Saleh Nass (Bahrain, 2014), “Dinner for few” Nassos Vakalis (USA, 2014) “I am forever” Noor (Thailand, 2015), “La botanique des amours” by Anne-Sophie Cayon & Laura Nicolas (Belgium, 2014) “Poop on poverty” Vijay S. Jodha (India, 2011) “End Parvaneha – Butterflies “of Teymour Ghaderi (Iran, 2014),” KidChup “Carolina Veirano, Guilherme Ghussn (Brazil, 2015),” Culinary Dreams “Clarissa Duque (Venezuela, 2015),” Daily Lydia “by Marco Zuin (Tanzania – Italy, 2014) They will be visible to the public in the second half of the day from 17.00 to 18.30. The jury of the contest is composed by  Angelo Riccaboni (Rector of the University of Siena and Chair of SDSN Mediterranean), Claudio Rossi (Professor of Agriculture and Food Chemistry, University of Siena) and Carlo Emilio Sapia (photographer and filmmaker). They  will decide the winning short film that will be awarded a prize of 1,000 €. During the first part of the event, from 14.30 to 17.00 the screening of international short films on  food and water from the archive and archive of Visionaria international Film Festival and  ICCG Think Forward Film Festival is in program. The screening of the archived short films of Visionaria will be commented by experts of SDSN Mediterranean. The vision of “I am Agha” Muhammad Umar Saeed (Pakistan, 2010) and “Yakuwa” Javier Vilar (Spain, 2010) will be  followed by the intervention of Lakhoua Malek (Tunisia). Then, the vision of of Beyond the sea of Matteo Fadda (Italy, 2009), “Youssou, the enfant d’eau” Atelier Room Enfant Admis (Belgium, 2000), “Cuando truena” Liz Lobato (Spain, 2012) and ” River “by Dan Hudson (Canada, 2011) will be followed by the intervention of Eugenia Ferragina. Finally,  the vision of “Symphonie pour un repas” Antony Fayada (France, 1998) and of “Tomato” by Alessio Angelico (Italy, 2010) will be followed by the intervention of Claudio Rossi entitled “The Hidden Source”. In conclusion short films from the archive of ICCG Think Forward Film Festival “The value of soil,” Ephraim Broschkowski and Bernd Hezel (Germany, 2013), and “God is rain”, of Rehad Deasai, (South Africa and Kenya, 2012) will be commented followed by Isabella Alloisio.
Program of the Event (in italian)